Why should I study in Poland?

The country located at a geographic crossroads that links the forested lands to the sea lanes...

How to Study in Poland

Poland is situated in Eastern-Europe. Poland is the sixth most populous member state of the European Union, hosting 38 million people. Poland's capital and largest city Warsaw is a very lively city with its picturesque Old Town which is listed as a UNESCO World Heritage Site. The Vistula and the Oder are Poland’s longest rivers and connect cities are Kraków, Wrocław, Gdańsk, and Szczecin.

According to OECD tertiary education attainment is increasing, however, with about 30% of the adults holding a tertiary qualification in 2017, compared with 11% in 2000. Poland has increasingly become a destination country for international students. There are 57,00 foreign students from 170 countries studying in Poland, over 6,950 more than a year ago (over 10% increase) in the academic year 2017/2018. Foreign students currently make up 5.63% of the total number of students in the country (ten years ago the figure was only 0.71%, in the academic year 2016/2017 - 4.88%).

In line with the Bologna process, Polish universities offer three levels of degrees: The first-cycle studies (3 to 4 years), leading to the title of a licencjat or inżynier (engineer), is the Polish equivalent to the bachelor degree. It is followed by two or two and a half year master programmes. In some subjects (e.g. law, pharmacy, psychology, and medicine) there are long, integrated master degrees (five to six years). The final stage is doctoral programmes (usually with an additional three years).

The below table shows the national breakdown of Polish universities and how they stand across the spectrum of above average (receiving a score of ‘A’ (very good) or ‘B’ (good)), or below average (receiving a score of ‘D’ (below average) or ‘E’ (weak)). In doing so, U-Multirank offers a clear picture of the countries strengths and areas for improvement.

Polish higher education institutions perform strongest in U-Multirank’s teaching & learning and regional engagement dimensions, while their performance in the knowledge transfer and international orientation dimensions are below the average of the global U-Multirank sample of institutions.

How much does it cost to study in Poland?

Addition of information on fees and financial support

In this section we highlight the fees for studying in Poland. The fees are shown in the national currency and address all fee types: tuition, enrolment (part- or full-time, etc.), certification, or other administrative costs. Students that are exempt from fees are also described, as well as information on international student fees if they differ.

In this section we highlight the financial support system implemented in Poland. The types of support covered in this section include: grants, loans, tax benefits for students' parents (or students themselves) and family allowances.  How these terms are defined, are outlined below:

What are the entry requirements for universities in Poland?

In general, the requirements for international students applying for universities in Poland include:

How to get a Scholarship in Poland?

Poland offers government, foundations and university scholarships that are available as well to international students both from within the EU itself and from countries outside the EU. For more information, please click here.

Do I need a Student Visa for Poland?

To be able to study in Poland international student have to legalize their stay in the territory of the Republic of Poland. European Union (EU) citizens who would like to stay longer than three months in Poland, simply need to register their stay in the country. Non-EU citizens need to obtain a visa at a Polish consulate in your their country before arrival in Poland. For more information, please click here.

How do Polish Universities fare in U-Multirank?

Here you can find the current Polish country report. 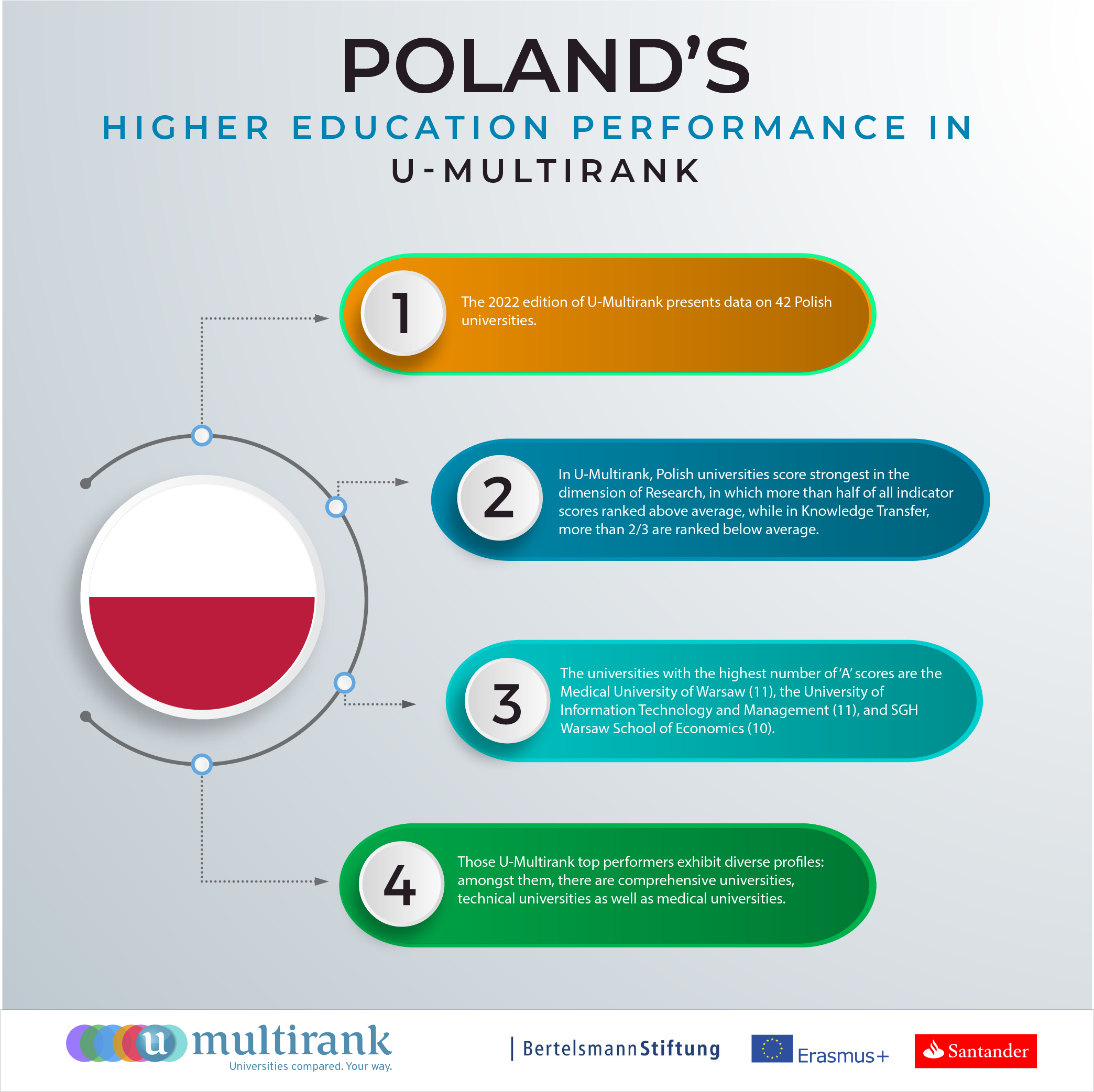 Where to study in Poland

Where to study in Poland?