Why should I study in France?

The world's most visited country ever with beautiful cities, language and vineyards...

How to Study in France

With its capital Paris and a large variety of landscapes, France is one of the most popular holiday destinations in Europe. Yet it also offers wide-ranging possibilities for studies to international students. In 2019 U-Multirank presents comparative data on 62 French higher education institutions.

Other than most EU member states, France’s HEI landscape is divided into four parts: around 250 grandes écoles (usually small, public or private institution with very selective admission), more than 80 public universities, institutes of technology, and a number of schools specializing in arts, music, and architecture.

During the last years, there were many merges of French institutions into clusters, called PRES (pôles de recherche et de l’enseignement supérieures). They bring together local universities, research institutes, and specialized schools. Sometimes students have to enroll and degrees are awarded by the PRES, sometimes by individual institutions.

Following the Bologna process, the degree-structure is three-tiered: the license (three years, equivalent to a bachelor degree), the master (additional two years) and doctorate degrees (usually another three years). Furthermore, there is a degree for the medical professions, a ‘state license’, the Diplôme d´Etat.

Here we highlight the overall performance of French universities on the institutional level per U-Multirank dimension. The below table shows the national breakdown of French universities and how they stand across the spectrum of above average (receiving a score of ‘A’ (very good) or ‘B’ (good)), or below average (receiving a score of ‘D’ (below average) or ‘E’ (weak)). In doing so, U-Multirank offers a clear picture of the country’s strengths and areas for improvement.

How much does it cost to study in France?

In France approximately 64 % of students pay fees. Tuition fees are determined on the basis of the kind of degree and subject/programme you wish to pursue as well as the private or public character of a Higher Education Institution. The average rates for tuition vary from about 170 EUR per term to 2,770 EUR per term for the licence (Bachelor) level and 3,770€ per year at the master level. You can find further information here.

What are the entry requirements for French Universities?

Non-EU/EEA/Swiss applicants are required to submit their national secondary school/university entrance exam diploma along with copies of their visa, passport, passport-sized picture and birth certificate. Moreover, you are asked to prove that you possess enough means to support yourself for the duration of your studies.

How to get a Scholarship in France?

A scholarship database can be found here.

Do I need a Student Visa for France?

EU/EEA/Swiss citizens do not need to obtain a visa. All non-EU/EEA/Swiss citizens must supply documentation on the reasons for their stay, how they plan to support themselves for the duration of their stay in the country as well as their accommodation arrangements. You must be in possession of the visa at the French border. Given this, you should apply for it at the respective French embassy or the respective consulate in your country of origin or residence. You can find further information here.

How do French Universities fare in U-Multirank? 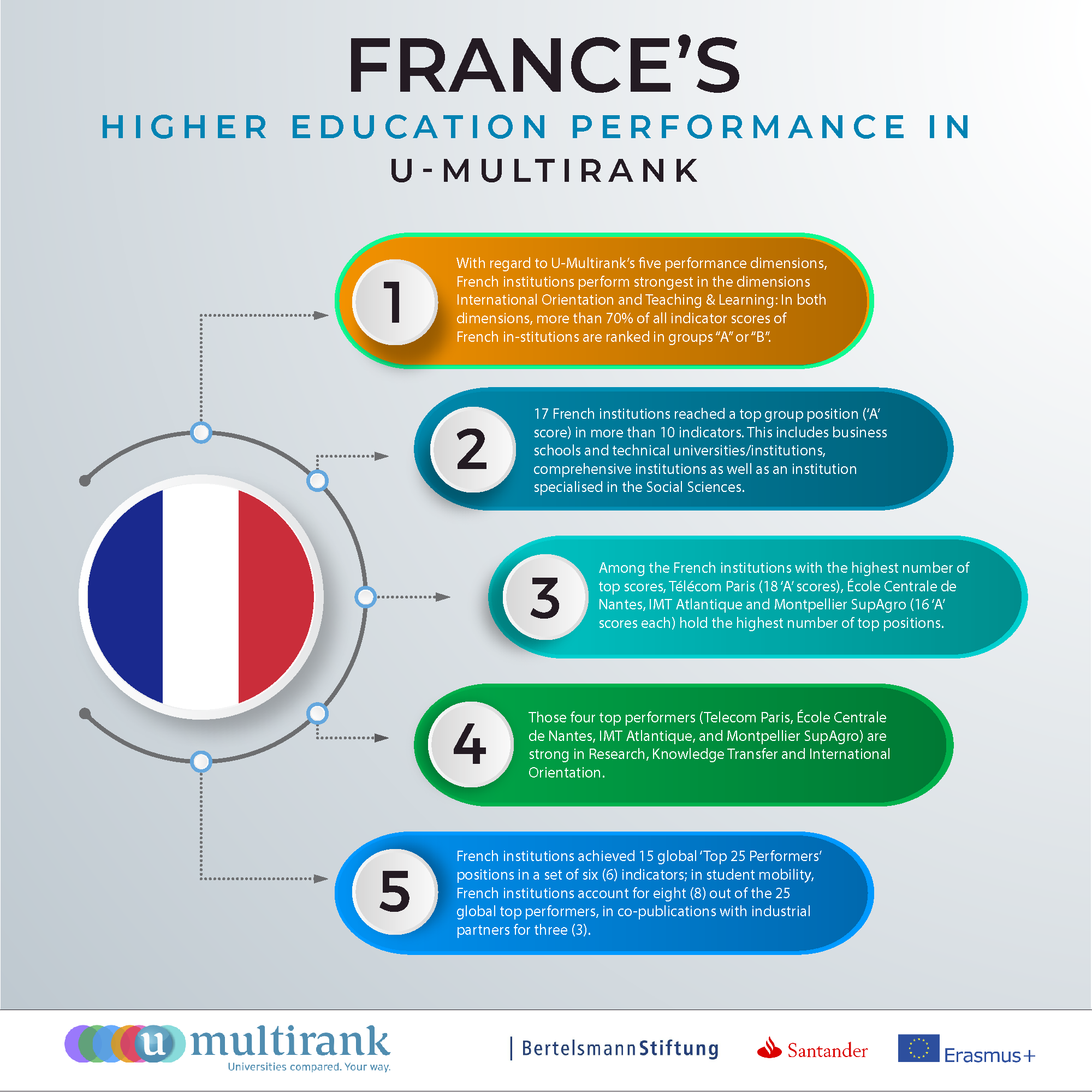 Where to study in France

What to study in France?

What to study in France?

Where to study in France?