Why should I study in Romania?

The country of impressive landscape and home of Count Dracula...

How to study in Romania

Romania is located at the crossroads of Central, Eastern, and South-eastern Europe and its borders are the Black Sea, Bulgaria, Serbia, Hungary, Ukraine and Moldova. Since 2007, Romania is part of the European Union (EU), with over 19 million people living here. Of those, about 1.9 million live in Bucharest, its capital and largest city. Other important cities are Cluj-Napoca, Timisoara, Iasi, Constanta and Brasov.

Higher education is ensured through universities,  academies, and post-university studies schools. In Romania, there are more than one hundred public and private accredited higher education institutions. More than half a million students are in public institutions, of which three-quarters of them are enrolled in bachelor programmes, and about 20% at the master level.

As in many Eastern European countries, many Romanian higher education institutions are specialised in particular subjects. However, there are also larger comprehensive universities.

Romania follows the Bologna scheme, so most of its tertiary level education is made of three cycles: at first a three-year bachelor degree, followed by a two-year master degree, and a three-year doctoral degree (PhD). Nevertheless, some programmes take longer to complete, for example those in engineering fields (four-year programmes), or some combine bachelor and master degrees into an integrated six-year programme (e.g. in medicine and architecture). The academic year in Romania starts in early October.

For more information about the entire education system in Romania, click here.

How much does it cost to study in Romania?

Most of the programmes charge tuition fees. The state subsidises a certain percentage of the places at university, which are allocating on the principle of academic achievement. Foreign citizens are equally authorised to profit from this subsidy. Private universities are not entitled to state subsidies; hence, all students at private universities are required to pay fees. The amount of fees is depending on the programme or place of study. The fees are on average between 1.500 - 9.000 € per year. Private institutions of higher education and postgraduate education are especially more expensive, as well as studies of medicine, arts and drama.

What are the entry requirements for Romanian Universities?

Foreign students have to recognise their qualification as equivalent by the National Centre for Recognition and Equivalence of Diplomas (CNRED).

More information about access and requirements can be found here.

Most of the Romanian universities offer some of their courses in foreign languages, e.g. in English, Hungarian, French and German. Students in programmes which are taught in Romanian, have to pass a language test. If they do not have adequate Romanian (language) skills, they must complete a preparatory year. Candidates who speak Romanian or study at a private higher education institution can skip this year after having passed the test, or formally prove that they have done their studies in Romania for at least four years consecutively. Students who want to pursue their studies in a foreign language must pay a fee for the language test.

How to get a Scholarship in Romania?

Are you looking for a financial solution or assistance for your studies in Romania? For information regarding scholarships in Romania, please click here.

Do I need a Student Visa for Romania?

EU and EFTA-Citizen do not have to apply for a visa, if they just want to stay up to three month, otherwise they have – like all other citizens – to apply for a visa. In general, students need to have a valid passport and provide evidence of sufficient funds. Students have to be able to pay the tuition fees and fund their stay (250 EUR per month). In addition, it is necessary to submit an apostilled certificate of good conduct and a ‘Letter of acceptance’ (issued by the ministry).

The note of authorization for the study and the necessary documents have to be verified at the consular representation of Romania to receive a permit of residence.

Information on the visa requirements can be found here.

How do Romanian Universities fare in U-Multirank? 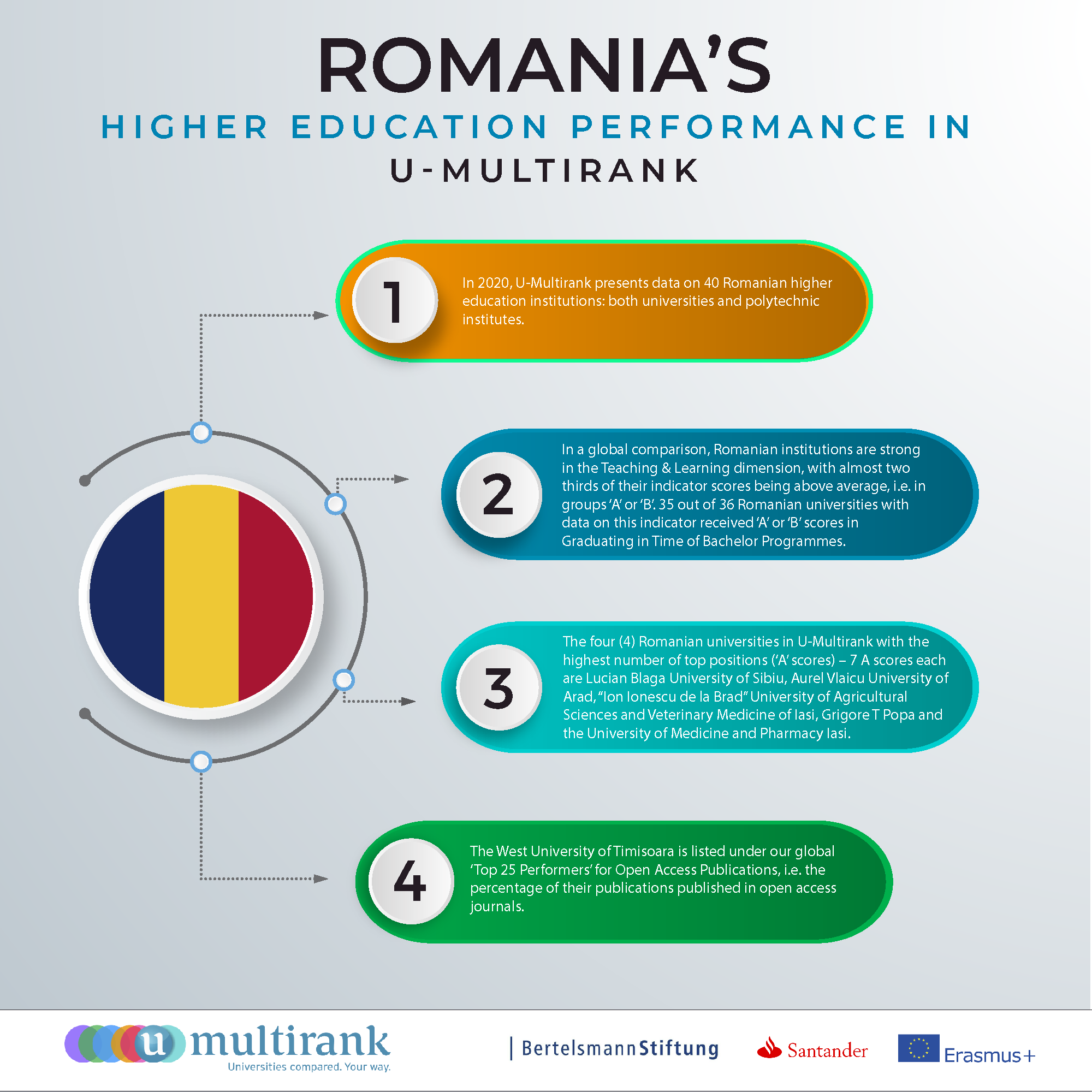 Where to study in Romania

What to study in Romania?

What to study in Romania?

Where to study in Romania?